The terms ‘leading’ & ‘lagging’ are often used in relation to performance indicators. Confusingly, indicators can be leading and lagging at the same time. How can that be?

Confusion can arise because the concept of leading and lagging isn’t a property of the indicators themselves but the things they measure. Once we think about the causal relationships between things, the lead/lag concept becomes much clearer.

Technically these are ‘directed graphs’ but they don’t need to be complicated to be a useful thinking tool. The arrows don’t even have to be ‘real’ relationships. An arrow can simply express a belief, a claim, even one with high uncertainty. Just the act of drawing them helps us to consider other factors which may also have a causal effect, for example:

The concept of leading and lagging arises from these causal relationships.

The arrows in the diagram are directional. Drawn like this is seems obvious that the effect of a variable should follow its cause. This isn’t always clear either in our beliefs or in the real world.

A cause will usually precede its effect in time. This is where the concept of a time ‘lag’ arises. There could be a very significant delay between a change in one variable and the change in another. We can draw attention to this using marks on the arrow.

Underestimating the temporal (time) delays in dynamic systems can get us into all sorts of trouble. Why? Because we can only change a lagging variable through the causal chain which produced it. That shift takes time, especially in big systems. A long drawn-out domino effect. 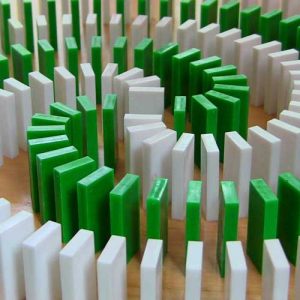 Why does this matter?

One of the warning signs in organisations is a fixation on lagging indicators. These are very often financial. By the time we look at a lagging indicator it is almost always too late to do anything about it. This is described as looking in the rear view mirror. Unless there’s been an earlier intervention in a causal ‘driver’ then we can’t expect the system to have changed.

What do you get when the finance team measures things? Lots of lagging financial indicators.

The inability to directly influence lagging financial indicators is one reason why targets come unstuck. Whether these are sales targets or shareholder returns they reinforce short-term thinking. And fuel the blame game. Because there’s nothing in the present we can do to influence these targets we have to point the finger at something other than our own lack of foresight.

Understanding the dynamics of the leading and lagging variables in a system is a prerequisite for timely decision making. When companies issue profit warnings and start cutting headcount then they’ve left it too late. The same goes for healthcare improvement. Targets missed again? Oops. A decision to improve something in the causal chain has to be made now to prevent future failings, months and years ahead.

We can stop treating lagging indicators as the end of the chain. They rarely are.

In all but the simplest systems there will also be causal loops. This means that even lagging variables are never the ultimate result in a system. Economic thinking might treat these as ‘externalities’ but organisations ignore these bigger causal loops at their peril:

We can measure the middle part of the chain. These variables are both lagging AND leading, the critical causal glue. Clearly the whole chain has to work to see a hoped-for result at some point in the future. 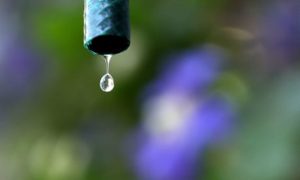 Pumping away at an input variable but waiting years to see the results is futile; a lost opportunity to do what would have worked. Imagine running to the end of a mile-long hosepipe to see if turning the tap on has worked.

Beliefs about cause and effect need updating with feedback evidence all along the causal hosepipe. This is especially true of causal beliefs which are mostly ideological and highly uncertain.